Printable version of this Document

Disclaimer: This document is still far from complete.

A symbolic layout is, in practice, made of only of three objects:

Each of thoses objects is associated to a symbolic layer which will control how the object is translated in many real rectangles.

Not all association of object and symbolic layers are meaningful. For instance you cannot associate a contact to a NTRANS layer.

The symbolic layer associated with blockages is prefixed by a T, for transparency, which may seems silly. It is for historical reasons, it started as a true transparency, but at some point we had to invert the meaning (blockage) with the rise of over-the-cell routing, but the name stuck...

In Alliance, segments are oriented (up, down, left, right). This disambiguate the left or right side when using the LCW and RCW rules in the rds file. It allows to generate, if needed, asymetric object in the real layout file. 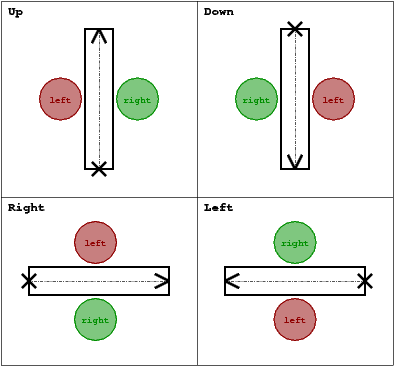 The RDS file control how a symbolic layout is transformed into it's real conterpart.

Unit used inside the RDS file: all units are expressed in micrometers.

Alliance tools relying on the RDS file, and what layers are active for them:

We can distinguish two kind of rds files:

The MBK_TO_RDS_SEGMENT table control the way segments are translated into real rectangles. Be aware that we are translating segments and not rectangles. Segments are defined by their axis (source & target points) and their width. The geometrical transformations are described according to that model. Obviously, they are either horizontal or vertical.

The translation method of a symbolic segment is as follow:

Case 1 the ALU1 is translated in exacltly one real rectangle of RDS_ALU1, both ends are extended by 0.18µm and it's width is increased by 0.09µm.

Case 2 the NDIF will be translated into only one segment under graal, for symbolic visualization. And into three real rectangles for s2r and druc.

Case 3 the NTRANS, associated to a transistor is a little bit more complex, the generated shapes are different for the extractor cougar in one hand, and for both druc & s2r in the other hand.

This table is to translate default VIAs into real via. In the symbolic layout the default VIA is simply a point and a set of layers. All layers are converted in squares shapes centered on the VIA coordinate. The one dimension given is the size of the side of that square.

Note that although we are refering to VIAs, which for the purists are between two metal layers, this table also describe contacts.

In CONT_DIF_P you may see that only three layers will be shown under graal, but five will be generated in the gds layout.

In s2r, when generating BIGVIAs, the matrix of holes they contains is not draw relative to the position of the BIGVIA itself, but on a grid which is common througout all the design real layout. This is to allow overlap between two BIGVIA without risking the holes matrix to be not exactly overlapping. As a consequence, when visualizing the gds file, the holes may not be centerend inside one individual BIGVIA.

The MBK_TO_RDS_BIGVIA_HOLE table define the global hole matrix for the whole design. The first number is the individual hole side and the second the grid step (edge to edge). The figure below show the hole generation. 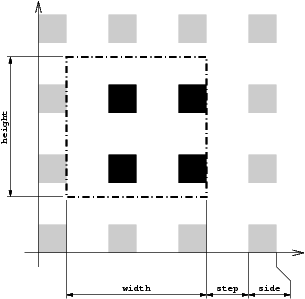 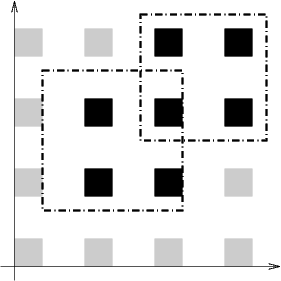 BIGVIA demotion. If the size of the bigvia is too small, there is a possibility that no hole from the global matrix will be under it. To avoid that case, if the either side of the BIGVIA is less than 1.5 * step, the BIGVIA is demoted to a simple VIA.

This table describe how the metal part of a BIGVIA is expanded (for the hole part, see the previous table MBK_TO_RDS_BIGVIA_HOLE). The rule give for each metal:

From a strict standpoint this table shouldn't be here but put in a separate configuration file, because it contains informations only used by the symbolic layout tools (ocp, nero, ring).

This table defines the cell gauge the routing pitch and minimal (symbolic) wire width and minimal spacing for the routers. They are patly redundant.